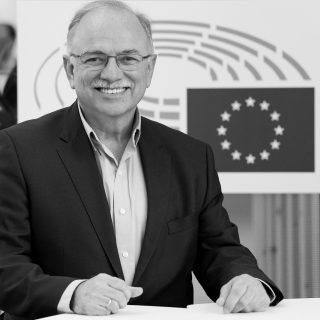 Born in 1955 in Athens. Graduated with distinction from Varvakeio Junior High School of Athens and studied with scholarship at the School of Civil Engineering of NTUA (National Technical University of Athens). He has worked as an engineer and business executive for 25 years (1980-2004). He is married to Nadia Soubasaki and they have two children.

He is a full member of the Committee on Economic and Monetary Affairs (ECON) and the Committee on Budgets (BUDG) and a substitute member of the Committee on Regional Development (REGI).
Responsibilities as Vice-President of the European Parliament:
– High-level Group on Gender Equality and Diversity, Chair
– Working Group on Information and Communication Policy, Member
– Working Group on Buildings, Transport and Green Parliament, Member
– Chancellery of the European Citizen’s Prize, Member
– Replacing the President for European trade unions
– Replacing the President for the Council of Europe and the Inter-Parliamentary Union (IPU)
Parliamentary Delegations
– D-US, Delegation for relations with the United States – Member
– D-ACP, Delegation to the ACP-EU Joint Parliamentary Assembly – Substitute